Ourselves on the Page: Celebrating Diversity in Graphic Novels

Ourselves on the Page: Celebrating Diversity in Graphic Novels 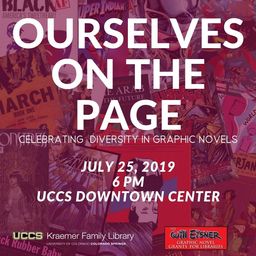 Join us at 6:00 p.m. on Thursday, July 25, at the UCCS Downtown Center for a screening of the documentary Drawn Together: Comics, Diversity, and Stereotypes, followed by a panel discussion featuring UCCS Professors Chris Bell and Suhaan Mehta, the owner of Muse Comics + Games Amanda Salmons, and Bemis School of Art Instructor and art therapist Kim Nguyen. Free food and refreshments for all who attend!


This event is made possible by the Will Eisner Graphic Novel Grants for Libraries.